The success of 'Contrasts' in Highgate prompted Ron to open the Brunswick Gallery in Judd Street W.C.l. 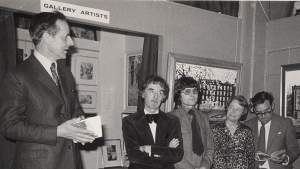 It featured the work of many talented people including Constance Stubbs, John Hopkin and Tom McGuiness, the latter's etchings, drawings and paintings were shown there. One of these was featured on the front page on 'The Times'. I own a small collection of his work. 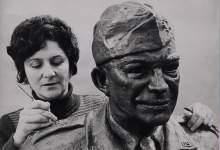 In Oct 1976 Constance Freedman had a one woman show featuring her bronzes and another group exhibition in 1977. In March 1977 a memorial bust of General Dwight D. Eisenhower was unveiled. The bronze had been commissioned by the U.S.Naval headquarters, and unveiled in March 1977 by General Haig.

As most of Constance Freedman's work was commissioned she wanted a sample piece of work to show prospective clients instead of photographs. Constance persuaded Ron to sit for her.