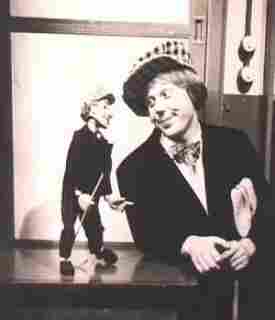 At the time of the Cold War puppetry connections with the Russians and their satellites were limited. It was something of a surprise when the iron curtain lifted and the Russian State Circus came to England. This hit the headlines in London newspapers not least because security was so tight. When the Circus artists arrived they were not allowed to speak to the press or travel at will.

The Russian State Circus had a famous clown called Popov. Why we made a replica marionette we were not too sure, it was just an idea. Joan made a good job of matching his clothes and he looked very good. We took him to a performance of the circus and despite incredible security they agreed to allow Popov to meet us and our marionette. 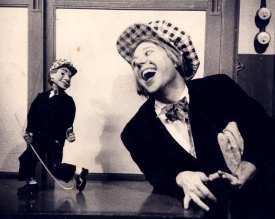 A PR man was called and arrived with a tall gentleman who we later learned was Norman Parkinson, the distinguished photographer! He could not believe his luck to have such an unexpected photo opportunity and took reels and reels of film. Popov the puppet naturally rose to the occasion.