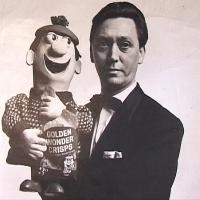 Poppa Crispin was already an established advertising character for Golden Wonder Crisps. It seemed a simple matter to translate the sketch into a 3 dimensional ventriloquist's doll. Arthur Worsley was to animate it and speak for it.

The doll had to be made precisely to the art department's specification which we did. We also worked all over Christmas, because the commercial had to be made to fit in with Arthur's commitments abroad. Early market research however, suggested sinister qualities in the dummy and it all had to be done again! We worked all day and night again over Easter. This time the second one proved to be totally acceptable to the crisp buying public!

It was very interesting to see how easily a jolly character could reinvent himself, by a slight facial elevation, a trick of the light or manual operation. An unexpected nightmare for their art department!